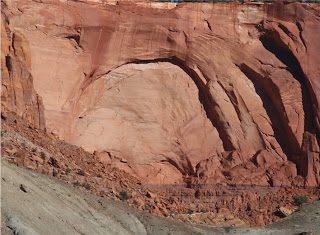 I spent a couple of hours today scouring Capitol Reef National Park for cliff formations with arcs, and photographing them.  I'm feeling a pull toward sketching them, an activity I seldom undertake, and at the same time am observing myself returning to old impulses and methods.  Am I pulling away from abstraction?  I don't think so; I have vague visions of using both approaches. It has never worked before, but it is an urge that keeps returning.  I seem periodically to feel a need to unify the abstract and the representational or referential -- and this is another such time.  Such attempts have never before been permanently productive, and usually have been discarded as a wrong path taken, yet I also acknowledge that they always feed the process: How can they not?

So I am once again feeling the urge to reference a concrete (well, sandstone) thing in my work, but am thinking that somehow I can also be true to the last nine months of abstraction.  If nothing else, I had a lovely day gazing at the strata and the desert varnish that characterize our local formations.  One of the photos is posted above.
Posted by Nancy at 5:40 PM