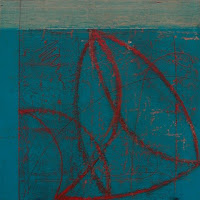 My "art deco" alphabet from Friday pulls me in whenever I look at it.  The gestures and movements are very natural to me, and in a sense it represents a language of mine.  Looking around my studio, I saw the 12" x 12" panel-in-progress at left, with the large additive gestures already in place (I had applied them with an oil stick some time back).  But as Meg and I spent our last hour together in the studio, I realized that I was still uncomfortable both with making marks by scratching out (in contrast to adding on top), and with being more free-form in mark-making (which I like to call scribbling or doodling).  I always have tended to get too repetitive or take the scribbling too far, ending with a result that I didn't like.

Bolstered by Meg's presence, and already familiar with her expertise in mark-making, I wanted to work on this before she left.  For her part, Meg had laid down enough cold wax layers on a couple of panels to want to try some scratching out, and was happy to demonstrate.  As I watched her, she described her action as controlling the pressure and speed of her tool, but otherwise being free in her marks.

The concept of combining control of the tool with freedom of movement clicked for me.  I think perhaps in the past I've either controlled everything or let everything go.  I worked for a while exploring the dynamics of balancing the two, and was excited to see what happened.  The smaller scratches on the panel above were my first attempt, and I went on to several other panels that have been languishing on the walls.  There is more work to do here, but I feel as though I've had a breakthrough.  Huzzah!
Posted by Nancy at 8:13 AM

Great content, Nancy. I like the way you approach this issue of developing a language in such a direct way. And what a great collaboration!