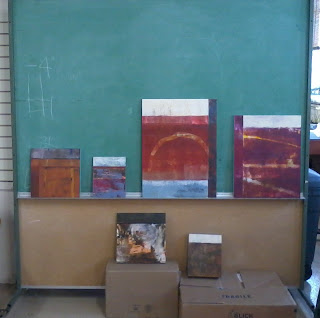 I may be finding a way out of the middle, a way to get to completion, thanks to a presentation yesterday by Rebecca on merging form and content. Both are equally important, but perhaps one can address them differently at different stages of a painting, in a kind of dance.

Initially, I want to have the patience to build up (five? six? eight?) completely random, experimental layers before beginning to impose any kind of order on the chaos. I can use that time and those spaces to play, to improvise, to push the edges of technique, to try anything, knowing that if it fails, it will be covered up anyway and that it will inform the ultimate surface. This is a very right-brain process, "rapid, complex, whole-pattern, spatial, and perceptual" (to quote Betty Edwards in Drawing on the right side of the brain), and concentrates mainly on form.

Content during those early layers is less important, though I want to keep in the more analytic side of my mind the concept of the lower geologic layers of Capitol Reef: the chaotic Moenkopi formation, the voluptuous Shinarump, the accents of Chinle ledges, the majestic Wingate walls, the soaring Navajo domes. I want to merge form and content without imposing any order or composition in those early layers of paint, to keep in mind that any forms that might appear are to be buried, just as those lower layers of the Reef are buried.

After a certain number of lower layers are established, I can become more analytic, with more direct mental reference to cliff, mesas, canyons. It would be interesting to put down a couple of layers with an aerial reference to the land, as if looking at a map, and then to create layers that refer to the landscape as we actually see it.

This is a matter of thinking in three dimensions, in a funny sort of way.  In the actual landscape, we see the layers of the cliffs and mesas vertically, but they were created horizontally, built up layer after layer. And the layers of paint on the panel also are built up on top of one another horizontally, as it were, creating the painting as though one were creating the Reef, building it, piling up the layers on top of one another.  The “vertical” views that one sees of the Reef will been seen from this perspective only where lower layers of paint are revealed by dissolving, cutting through, or otherwise exposing them.  At the same time, however, the vertical cliff views can be rendered simply by referring to them on the painting surface, creating a portrait of them, treating the surface as if it were a cross section of all those layers, the view that we actually see. (This is where I've gotten into trouble before, because that visual image, which is the reality that we all see, becomes my composition.)  By working abstractly and addressing both approaches at the same time, I can increase the complexity and the visual richness of the work. I will never render a portrait, but by using multiple views of the land, from above and from in front, in multiple layers, I will incorporate the content into the form of the painting, and truly merge the two. I just have to have faith that the content will emerge through the form, and have the discipline and patience to let the materials create the content.

The photo above shows the five panels with which I ended the workshop.