getting onto the surface 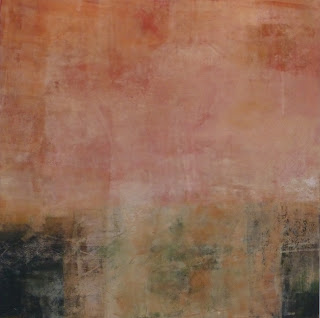 Several weeks of attention to building up the lower layers of paintings, concentrating on themes, colors, and textures, have produced five or six pieces that beg for completion. I've written about the topic of "getting to finished" before, since it is a problem for me. I can easily ruin a painting by trying to force it to finality. At the other end of the spectrum, Rebecca advocates letting the final surface emerge on its own. I am uncomfortable with the amorphous quality of my results when I try this, although I understand the idea. It is essentially the opposite of forcing.

As I consider the paintings on my studio wall that are crying "finish me", I am wondering if there is a middle ground here, a set of techniques that lend themselves to the final layers and a set of concepts that similarly are more suited to the final surface than others. Certainly the creative focus is different from that of earlier layers. Although I always bring even the lowest layer to a point that is compositionally pleasing, it is seldom a layer that has a public face -- that is, that I would present to the public as a finished piece. Instead, I experiment, frequently trying out ideas that might work on a final layer, but without the burden. I focus on thinking about a theme, and on establishing colors and marks that work well with the layer(s) below. I have found that the themes that I most frequently address on these lower layers are objective (in the sense of being things): rivers, plants, fossils, rocks.

When I get to a final layer, I realized today, I am not satisfied anymore with portraying things. I bury the fossils and the riverbeds; they are not something I want on top. Instead, I want to present something that is more amorphous -- that is, I suppose, more of a mood or an emotion. An impression. A mystery to be pondered. And yet, I want it to refer, at least in my mind, to the constructs embodied underneath, and to my overlying theme (no pun intended) of the geology of the land. That geology contains structure, and I want some visual structure on which to hang the mood.

These final layers, then, request a different approach from the lower history. I want them to be subtle, to be finely tuned, to cause curiosity and response. I have worked a lot on the top layers of two or three pieces in the past few days, and I find that there is probably a subset of techniques that lend themselves to this phase of the painting where others don't. If the lower layers create texture and depth, sometimes with great color contrasts, the upper layers pull out that texture from below but are themselves smoother, and similarly may reveal, or refer down to, the color below but are themselves more harmonious. If the division of space on the hidden layers is accidental, or experimental, or nonexistent, the compositional division of the visual layers must be, to my mind, deliberate.

The image above is of a 24"x 24" painting in its final stages; the process by which I added the last few layers gave rise to the musings here.
Posted by Nancy at 4:30 PM