the joy of loss 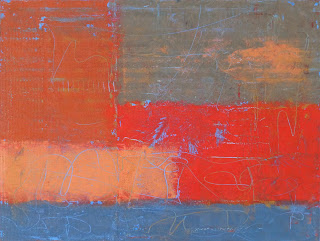 I spent a happy hour this morning scraping down about a dozen paintings. Each has several layers of paint built up, but otherwise they comprise a diverse group. I was perfectly happy with some of them; others seemed perhaps overwrought, perhaps nondescript. But today I was nondiscriminatory, and with the aid of a 6-inch-wide metal scraper, I ran roughshod over all surfaces.

The results were refreshing. If there was a lot of texture, the scraper sliced it down, revealing lower layers -- yet these still remain hidden in the valleys between the former ridges. Kind of like taking off mountain-tops. If the texture was modest, but still rose above the top layer of paint, whispers of color would show through from underneath. And even if the top layer was almost completely flat with seemingly no texture, the scraper wore it down a bit, producing a lovely look of weathering and age, hinting at history. There was not a single painting that did not benefit.

The "loss" was of course partly literal: paint came off in strips and crumbs and, from the driest pieces, as dust. But in many cases the paintings also lost either a preciousness or a gridlock that had prevented progress. Some I had become afraid to touch, because I feared covering up an effect that I liked. Gentle scraping left the effect present, but lent it a depth and interest by hinting at what lies underneath. In a few instances, such as the piece shown above, the latest layer was thick and opaque and had not produced a felicitous effect. Scraping it down brought out marks and hues from underneath, livened up the surface, and got rid of a lot of too-thick paint. In every case, I looked at the piece afterward with new eyes, seeing new possibilities and visual freshness and interest.

Part of why I am so pleased is that I have long been drawn to both the concept of weathering in relation to my muse of the geological landscape and the look of weathering in other people's work as well as my own. I have scraped back before, and the process has helped produce some of my favorite paintings. In terms of other artists, Marcia Myers' "frescos" painted on linen are among my favorite works, and weathering is certainly part of her look. And Diebenkorn's Ocean Park series, one of my all-time sources of inspiration, present the same characteristic.

Perhaps a final reason that I am pleased with this work today is that I have always meant to explore scraping back in a systematic and consistent fashion. Because I had several pieces with which to work, I could experiment with the effects of variables such as the type of scraper and the relative dryness of the paint. As a result, I now feel both more comfortable with the process and more aware of its potential. And I like the effect: In addition to the weathered appearance, the treatment adds an air of refinement (for lack of a better word) to the surfaces.
Posted by Nancy at 11:28 PM