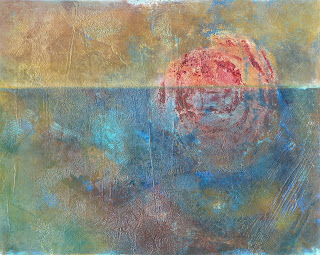 Most of my time here in Farrera has been spent exploring the moods and emotions that I bring to painting, and that painting invokes in me. I spent the first week of my residency trying hard to paint from a place of emotion, and just got frustrated. I don't paint emotionally, but rather from responses and impressions to what is around or in front of me. Music contacts my emotions; visual art fills a different role and expresses a different side of me. The image at left is one of the works, 16" x 20", that resulted from that first week of work.

My second experiment, inspired by my recent contact with Diebenkorn's work, was to paint from representational compositions, approaching them abstractly and trying to express an emotional response to the original scene. The emotional aspect again did not work, and after struggling for a few days, I also realized that I was dividing my process into two parts, starting a piece figuratively and then abruptly switching to abstraction. The transition occurred when I got frustrated or bored with the restrictions or misdirections of the figuration. At that point, however, I would resort to compositional knowledge, seldom referring to the initial scene, and working randomly rather than following a plan. Working from representation doesn't seem to work for me, just as planning the process in advance does not work.

My overall project here is to bring increased personal meaning into my work. The question remains, how to do that? I thought to take as my model abstract expressionism, which is non-representational, seeks spontaneity, and looks for emotional intensity. My finished work is definitely not representational. Since a strong element in cold-wax painting is to let the process lead, it also invokes spontaneity. The remaining issue is that of emotional intensity or, put another way, personal meaning. But it is not working to try to force that.

Where to go next, in my final week here? What do I want my paintings to convey? I still want to find a theme that is mine, a vocabulary that is mine, an internal geography that is mine. Perhaps I should work instinctively and responsively, and not try to force “meaning”. My own vocabulary/geography will evolve naturally.

During the first part of the residency, I've tried to (a) work from emotion, and (b) work from figuration. Neither has worked very well, but they did lead me to the insight that I was dividing the process. Yesterday I started three new pieces, neither trying to define what I was saying nor consciously using any internal geography or vocabulary. Just painting, seeing what comes from the momentum of the past two weeks. The experiment continues.
Posted by Nancy at 9:12 PM