A long and luxurious studio session yesterday afternoon followed a meaningful and satisfying cello practice in the morning. It was the first day that I had really plunged into either activity with attention and patience since we returned from Spain.  In both cases, I actively resisted the impulse to leap in and accomplish something. Instead, I allowed myself to relax and interact with each moment of what was happening.

While I was away, I was aware of a sense of distance and perspective from both activities, and a sense of seeing them -- and myself within them  -- from almost a third-party point of view.  Jerome and I talked about being anthropologist-observers of, rather than participants in, the cultures we were visiting.  I also took on that role when thinking about home, painting, and cello.  I kept that sense of observer yesterday, just long enough to change the dynamic of both the studio session and the music session.  The result, in both cases, was a mindfulness that let me ignore the mindset that pushes for production and encourage the mindset that stays in the moment and engages with what is going on.  It is much more rewarding, and I need to cultivate it more.  Perhaps that is a project for this winter: to not worry about forward progress in cello, or producing finished paintings, and just be in each moment with each activity, and let things evolve.

In the studio yesterday, I brought out a painting that needed some line work.  For some reason, the piece made me think of a ruined castle that we visited in Gormaz, Spain (above).  Caught by the memory, I picked up a ceramics needle tool and let my hand travel the road up the high hill on which the castle stood, then delineate the ruins and the fields in the valley below.  Then I put down more paint.  I ended up working on the piece for nearly an hour, lost in remembered sensations from that day a few weeks ago.  I didn't even think about how the painting might (or might not) turn out.

In cello practice, I focused on intonation, the exact sound of the notes played, their purity and their relationship to each another.  Again, time went by without my noticing.  I was completely caught up in the task at hand, and I heard nuances that I had never heard before.  I explored minor thirds in various iterations without thinking about anything but the sounds.  I wasn't working on a piece, and I had no further goal at that moment than to play with as perfect intonation as I could achieve.

In both cases, the small accomplishments clearly will contribute to later goals, but I achieved what I did because I paid no thought to those larger aims, but focused on what was going on at the moment.  And, at the end of the day, the satisfaction was deep.
Posted by Nancy at 10:19 AM No comments: 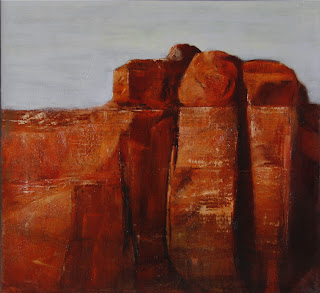 This is our third day home from Spain, and jet lag and a nagging cold caught on the trip are giving me a sense of suspension in time and distance from daily routine.  I am in the midst of cleaning my studio, a ritual that I have used before, after an absence, to help get back into a productive mode.  Opening the door yesterday brought an interesting mixture of reactions as I re-engaged with current work.  I felt a strong desire to get rid of older pieces that are neither cold wax nor abstract.  My more recent pieces in cold wax just feel so right.  Not that I don't still have favorite past paintings -- and in a wide variety of styles! -- but those pieces hang in the house, while most of the old paintings in the studio are pieces that I never let out the door because I wasn't happy with them.  I'm still not, but rather than hang onto them to "fix" them, as has been my tendency in the past, I now just want them gone.  One exception, a piece for friends that is nearly done, a semi-abstract landscape of our valley.  I need to settle down to finishing that, and I've been avoiding it.  It pulls me into past methods and, to some extent, into past insecurities...the same reasons I am wanting to toss the old work.

I was somewhat surprised by feeling such a strong re-commitment to abstraction and to the cold wax process.  I wasn't aware that I was questioning it.  The reaction may have been strengthened by not getting into a statewide juried show to which I submitted an old piece, pre-cold wax and pre-abstract.  Creating that particular painting accomplished many things for me at the time, over two years ago now, but  as a finished piece it also never quite worked (and also has never sold).  I think that entering it into the show was partly to find out and decide its final worth.  Which is, that it was a great process piece, but wasn't my voice.  An image of "Three Sisters", 22"x24", is above.
Posted by Nancy at 7:09 AM No comments: