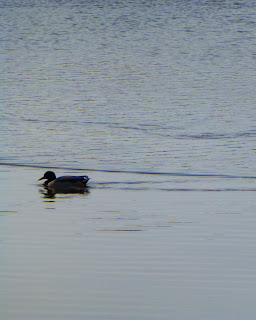 I move through my days with the feeling that something special is happening, and it is clearly the anticipation of the residency in Farrera that is causing the mood. I have seldom in my life done something so forward looking, on my own, in a blatant and direct attempt to explore myself and my self-expression without impediment. Far from feeling narcissistic, the sense is rather a combination of opportunity and curiosity and excitement. A chance to be free for a while of the demands and expectations of others. To have the time and space to focus on my own demands and expectations, to reflect on my life and what I am doing, to celebrate existence and all the wealth that it contains. To not need to play external social roles that take me away from the centering sense of who I am and how I express my self. To come home to myself over a length of time that allows me, I hope, to arrive at a new level of understanding of how I relate to the world around me. Not the social world, but the natural world, and the spiritual world (for lack of a better term). The latter two come first, and the social world follows their dictates, in my little hierarchy of life.

That said, I came up against the proverbial wall today (I knew it was coming, though I'd hoped against). I am experimenting more freely with the various media that I plan to take along, and I'm feeling more comfortable with them, but I ran into barriers today that are not the materials but rather my use of them. In other words, signing up for a residency and playing with new paints has not answered the question of what I want to say and how I want to say it.

Still, those larger questions are what I hope to address in Farrera, and the fact that the same issues are cropping up in mixed-media-on-paper just as they did in oil-&-cold-wax-on-board should not surprise me. I guess I had hoped for a miraculous little leap over those same old difficulties that would leave the road wide open and unencumbered when I get to Spain.
Posted by Nancy at 5:34 PM No comments:

Much of my energies over the past few weeks have gone into the practicalities of preparing for the residency at the Centre d'Art i Natura this fall. Just the logistics of getting myself and my materials to a tiny town high in the Pyrenees has required a certain amount of thought and research. I have finally determined that I can get there fairly easily by an early train from Bilbao, where Jerome and I will end our vacation, to Lleida, and then by bus the same day to Farrera.

Then there have been the hours in the studio working with acrylics, watercolors, pastels, and ink on a variety of supports, first to determine what materials most adequately produce the effects I want, and then to practice enough to feel comfortable with them. The last little project was to figure out how to transport those materials from home to the Centre safely and without too many separate pieces of luggage. The suitcase shown at left is inexpensive but well suited to carrying all my tools, paints, and supports together in a manner that I hope will fairly sail through customs. Then I can just leave it closed until I get to my temporary studio.

I want to spend more time in my studio here working with the materials, but I am less concerned about them than before, and will be ready to place an order for the supplies I will need in the next couple of weeks, giving them plenty of time to arrive before our departure on September 11th. This coming week I hope to clear my mind of this clutter of practicalities and shift my focus to the creative aspects of my time at the Centre. I have read a bit about artist residencies, how to organize them, and what to expect, and I am delighted to find that the common wisdom is, one, to stay loose and not attempt too well-defined a project, and, two, to focus on the broader opportunities that a residency can afford: solitude and distance from the routines of home, interaction with other artists from other backgrounds with other perspectives and goals, and time to explore, day after day, one's own artistic calling and the new directions in which it might develop. Other than the general adventure of just going on the residency, this is what really pulls me to the Centre: being able to live and breathe those things that matter to me (not only painting but writing, meditation, and perhaps some dance movement), over a fairly long period of time (three weeks), with no interruptions and distractions other than those I create myself. I'm glad to have the practicalities nailed down enough now to concentrate on these other things.
Posted by Nancy at 7:02 AM No comments: 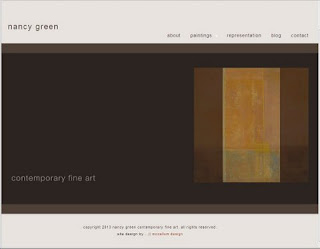 After many months of thought and many communications with John McCallum of Ogden, Utah (www.mccallumdesign.com), and with several interruptions for illnesses and broken wrists, a new version of my professional website is finally launched.

I had been wanting to redesign my site for a couple of years, ever since I started producing a fairly coherent body of work in oil and cold wax that I feel is my stable and continuing milieu for painting. The old website was creatively designed by John to fit the production that came from a diverse and ever-changing artistic development. Now that I have settled down into a more stable style and methodology, I felt it was time to change the site to reflect those aesthetics. I also wanted to modernize the design of the site, and to give it a more contemporary appearance.

I am very pleased with the results, which can be seen via the NGreen Studios link at the right side of this page. Not only is the look more contemporary and clean, but the navigation is easier and, I think, friendlier. In addition, John's reprogramming is such that, with careful written instructions from him, I can make changes to the content of the site without needing to go through John to get them made (I haven't tried this yet, but hope to do so in the next couple of weeks).

As a result of this investment, I no longer feel that I need to apologize for my website being out of date when I tell people about it and give them the link, and I am happy to have it out in the world for people to see. And it will be easier to keep it current, adding new images and other adjustments. Future considerations are whether to make use of it as a more active marketing tool, for example, to offer paintings for sale through it. My inclination is rather to sell only through galleries, but perhaps with time that will change. For the moment, I have the satisfaction of having completed a long-outstanding project and being thoroughly pleased with the results.
Posted by Nancy at 3:58 PM No comments:

getting to know india ink I have never stopped to explore in depth the use of ink in drawing and painting. I liked what it offered the few times that I played with it in some workshop or another, yet I couldn't see how it would work with oil painting. But one of the goals of my residency project this fall is to explore more deeply the use of line in my work. Since I am painting with watermedia rather than oil, I decided to revisit the use of ink. Last week, I pulled out the dip pen and nibs that I stored away years ago, and purchased a fresh bottle of India ink. It is delightful stuff, and complements the effects I am beginning to achieve with acrylics and watercolors.

India ink has been around for thousands of years. Cave painters used ink made from carbon back in the neolithic era (2500 BC). India ink was so named because the ancient Chinese traded for its ingredients from India. It distinguishes itself from other carbon-based inks by incorporating lampblack, a type of carbon traditionally produced from the soot of lamp oil. Ancient Buddhist scripts and Talmudic teachings were written in ink, as were the Dead Sea scrolls.

I began with dip pen and ink bottle, and at some point in my sketching found a kind of thoughtful rhythm: dip, pause, stroke, dip, pause, stroke. I liked the interruption of the drawing process that the dipping required. I loved the different marks made by the different nibs, and the way the ink flowed off the point, and the way that the pen responded to the pressure and movement of my hand. For contrast, I tried commercial markers and technical pens on another work in progress: I had perhaps more control over the placement of the ink, but I felt less connection to the marks I made.

Then I moved to brush work, using both a fine brush for lines and a hake brush for washes. The image above is a detail of a wash of quite diluted ink on a surface partially primed with light molding paste, a Golden product. The combination -- but mostly the ink -- created a unique texture and mood. I look forward to exploring more such effects.

On another occasion, I used the handle end of a small brush to draw back into a wash of ink; in the areas where the underlying surface was absorbent, this produced an interesting effect. Where the surface had been sealed, the ink did not cover well enough to draw back into. This promises interesting results when I can apply and manipulate the ink more deliberately on absorbent and non-absorbent surfaces. For the moment, I am very much in an experimental mode; I may understand India ink fairly well after all these tests, but its interaction with all the other watermedia pigments and mediums that I am exploring is still unknown.