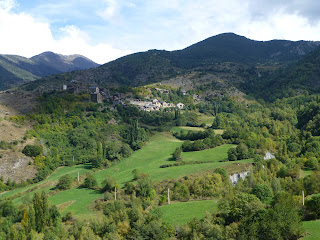 After an uneventful, if long, journey from Bilbao by train, bus, and taxi, I am in Farrera, Spain, at the Centre d'Art i Natura for the start of my three-week artist residency. Farrera sits at the head of a valley high up in the eastern Pyrenees, as the photograph at left attests. The scenery is dramatic and all-encompassing, and as summer winds down, the first signs of the transition to autumn are evident in the trees and shrubs. There are still plenty of wildflowers to attract butterflies, but the wild berries are also fully ripe, and the birds are constantly in and out of the thickets.

Just as the seasons are in transition here, so this has been a transitional day for me. I unpacked and settled in, and could feel myself shifting from vacation mode into studio mode. By the time I took a walk in the afternoon, I could be fully present in the shifting sunlight and shadow, listening to birds and lizards rustling in the bushes, feeling the soft air on my face. I had spent much of the morning reviewing my thoughts and notes about the residency and the things that I would like to explore while I am here. I reveled in the luxury of not needing to turn my attention elsewhere: What a gift.

True to my intent to pay more attention to my inner state, I did sort of a mood assessment as I walked, and the main things I felt were peace and sheer pleasure in being here. I didn't try to take it any further, artistically. Although I spent the late afternoon getting my studio space organized and some panels ready to paint, the real work begins tomorrow. I have set up a few different projects, ranging from full-blown 16"x 20" acrylic paintings, to daily drawing exercises, to small watercolor impressionistic postcards. I want to give myself some choices of activity as I work my way more deeply into painterly expression. I also want to feel free not to need every piece to be successful, and the multi-project approach should help that. If I can keep my attitude one of curiosity ("what will happen if...?"), I should be able to avoid too many moments of discouragement. This is not the be-all and end-all of my painting life; it is just an opportunity to investigate deeply what I love to do.
Posted by Nancy at 1:53 AM No comments:

The Tito Bustillo cave complex on the Atlantic coast near Ribadesella, Spain, contains works of paleolithic art on a par with those of Altamira and Lascaux. Horses, reindeer, bison, aurochs, female figures, each drawn within its own space according to the artist's intent. For these clearly were not casual or amateur works: They are too sophisticated, and the caves are too deep and too dark. Meanings about which we can only speculate. Layers of paintings on top of one another in the largest cavern: sequential interpretations of the human world across the ages? The continual improvement of the cathedral? Commenting on previous work?

The most important material -- the human figure, sexual symbols -- is hidden away at the back of the cave, in side caverns, hard to find but indicated by discreet marks in red, painted along the passageway.

The creation of these paintings captured my imagination as I stood before them. To paint within a circle of light, when all around you is silence and darkness, except perhaps for the murmur of the subterranean river. To render not from a live model but from your imagination and memory, and to do so so accurately. To not have a flat surface but rather the irregular and quasi-three-dimensional surface of a cave wall curving upward. The  dim firelight from the lamp in your hand wavering in the air, unsteady, flickering, making the image move even as it is created.

Red dots and outlines of hands dating back 40,800 years are records of the human (neanderthal?) instinct toward pictorial creation. These are possibly the beginnings of recorded communication. But the animals in Tito Bustillo signify much more, being truly artistic renditions. A male and female deer face each other, intertwined. A curve in the rock face is used to emphasize a neck or a haunch. Using color: black, red, white, even purple. Painting images on top of images, not obliterating but enhancing, interpreting. Leaving pentimenti.

My reaction is not so much awe as confirmation. The instinct to communicate through painting. The fascination with the materials and means at hand. The desire to improve, either one's own work or that which has come before. The joy of a curve. The creativity of a dot. Realism, impressionism, minimalism, abstraction, all present so long ago.
Posted by Nancy at 2:27 AM No comments:

the matter of time

Jerome and I are in Bilbao, on vacation prior to my residency in Catalonia. At the Guggenheim museum here, I was captivated by the Richard Serra installation "The matter of time". It consists of eight elliptical pieces of torqued steel that each must be at least twenty feet tall. I had seen a film about its creation; to walk through it in person was an extraordinary experience. The photo at left shows one of the eight pieces, with a second in the background. It scarcely does the work justice, but may give a sense of its form and color.

The museum displays a statement by Serra about the installation:

The torqued ellipses, spirals, spheres and toruses exist in the polarity between the downward force of gravity and their upward rise in elevation which attempts to attain a condition of weightlessness. The sculptures are not objects separated in space but on the contrary they engender the spatial continuum of their environment. They impart form to the entire space, they shape the space through axes, trajectories and passages between their solids and voids.

I titled this installation The matter of time because it is based on the idea of multiple or layered temporalities. As one experiences each work in the context of the entirety of the installation one will become aware of the obvious diversity of durations of time. The meaning of the installation will be activated and animated by the rhythm of the viewer's movement. Meaning only occurs through continuous movement, through anticipation, observation and recollection. However, there is no prescribed view, no preferred sequence, no preferred succession of views. Each person will map the space differently. There is an unlimited range of personal experiences, but they all take place over time. When I talk about time, I do not mean "real" time, clock time. The perceptual or aesthetic, emotional or psychological time of the sculptural experience is quite different from "real" time. It is non-narrative, discontinuous, fragmented, de-centred, disorienting."

I read this as true, but to me it does not express adequately the experience of walking around and through the different works. I was very aware of the moment in time as I paced through them, yet there were other more salient, and perhaps more subjective, reactions that stay with me even now, hours later. The primary memory is that, for all their grandeur and monumentality, there was a curious sense of intimacy within and around the pieces. The sensuality of the curves and of the textures of the rusted steel seemed to embrace me in a very physical way. The installation invited slow and mindful movement, and there were moments when the particular shape of space, be it an opening, a passageway, or the end of a path at the middle of a piece, invited pause. The light on the surfaces shifted, and was sometimes matte sometimes lustrous, sometimes warmer sometimes cooler, sometimes lighter sometimes darker. The changes led one onward, to see what would happen next. In fact, curiosity is a major factor in experiencing the whole installation.

I wondered what it would be like to experience The matter of time in the open air rather than inside a building, and what effect weather and time would have on it. I decided that it would be a very difference experience to explore it outside with only natural light, and that while it would be interesting, there was something about it being inside that was part of its definition. Perhaps the ceiling and walls added to the sense of intimacy that was so strong for me. In fact, experiencing it outside could detract from much of its fascination. I wonder if this was part of Serra's reason for deliberately putting it inside.

All in all, this was an interaction with a work of art that was profound and, I think, lasting. It was such a physical experience, in addition to the psychological one. I wonder if a painting could achieve a similar effect. 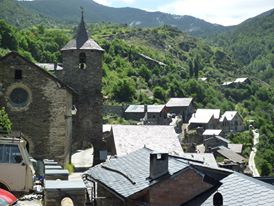 Here is the proposal for my residency project that I finally submitted today. Better late than never! At left is a photo of Farrera, the town in which the Centre d'Art i Natura (CAN) resides.
~~~~


The project that I plan to pursue during my residency at CAN is an introspective one, and I don’t know where it will lead. It has been difficult for me to define.

My desire is to develop the meaning that lies beneath the surface of my multi-layered abstract paintings. A scholar described Richard Diebenkorn’s work as having a “tension beneath the calm”, which comes close to what I mean. I want to explore the interior, subjective world from which I can create unique and personally meaningful work. The Abstract Expressionists used non-representational, painterly means to express individual spiritual and emotional themes. I want to explore for myself the “expressionist” side of that aesthetic.

I don’t really know what this means in concrete terms, except that until now, my work has consisted of interpretations of the external world around me. Clearly, these interpretations have my personal stamp on them, but they are created from an outward orientation and could be seen as merely artistic attempts to portray the beauty of the world around us .

I want to use the time at CAN to turn inward and paint from my own internal geography. I don’t know how I will do that, nor where it will lead me, but I do know that I need the extended period of solitude and focus that the residency will provide.

My rough plan is to begin by working both figuratively (drawing) and abstractly, and to focus on expressing mood and memory through those processes. This was the idea behind the theme of “raíces y tempestades” that I originally submitted. I want to explore questions such as: How does mood affect my choice of subject matter? And how can I portray that mood – through what medium, composition, palette? How do I react to specific subject matter, and how can I portray the reaction rather than the subject?

I need to allow mood and memory to play an explicit role in what I do. In the past, I have treated my work as more of an academic and intellectual exercise than an exercise in self-expression. I want to experience portraying a subject such that it reflects my own internal vocabulary rather than someone else’s.

Until now, I have referred to the external world and to other artists’ work as I developed my skills and visual vocabulary. I want to use the residency to refer not to external sources but to my own internal patterns, and to begin a new phase of work rooted in more personal terms.