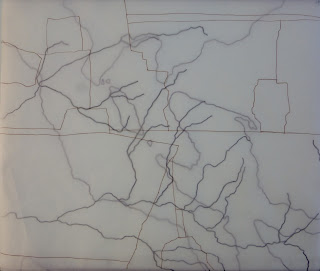 Judith Brodie's book Yes, no, maybe: Artists working at Crown Point Press arrived earlier this week and has provided hours of stimulation and fascination. I have to remember that the works included in it are largely etching-based, and use materials and techniques that go far beyond monotype. But the book creates fantasies in my head (the section on Diebenkorn and his work is particularly captivating), out of which grew an idea for interpreting my "Colorado Plateau strata" concept through the monotype process. So today I gave it a try. 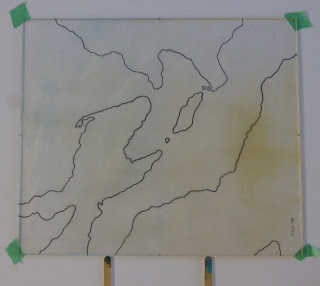 The process was long, partly because I was feeling my way and partly because, well, it just took a long time. I began by creating three templates (for lack of a better term) using tracing paper. The three are shown layered on top of each other above. The first was a drawing (right) from one of the maps in Ancient landscapes of the Colorado Plateau of Pangaea, the "super-continent" that existed between 300,000 and 100,000 years ago. As that huge land mass began to break apart, the section that became the Four Corners region began its journey to where I live now. The second template was a tracing of the Fremont River and its tributary creeks, from a USGS map of our county. The third was a rendition of an imaginary segmented cliff face (the magenta composition in the final print, below left). 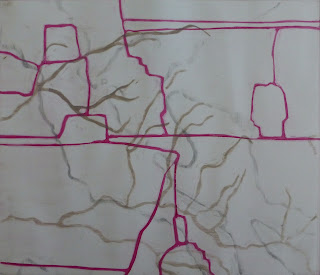 I then created a 12"x14" plate for each of the templates in turn, using the subtractive method. I coated each plate with, sequentially, pale gray, pale brown, and quinacridone magenta, then removed ink with paper towels and cotton swabs to leave only the lines of each image I was rendering. I ran each plate sequentially onto a piece of damp BFK Rives paper to produce the final result.

I can't say that this is a final work, as far as I am concerned, but I did achieve what I had hoped to do. It is a basis on which I think I can build toward that illusive imagined series of prints that reflect my strata theme: multiple passes through the press creating physical strata on the print itself, and images on the plates that also reflect the various aspects of the geology of this place where I live.
Posted by Nancy at 6:39 PM No comments: 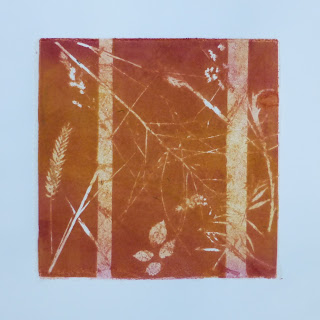 Inspired by Howard Hersh's work in Julia Ayres's Monotypes, I spent an intense morning trying to put together my skills and knowledge to date, to produce a satisfying print. I wanted to try blending, masking, multiple runs, and chine collé, all together.

First, I got out my AKUA Intaglio inks, and and blended four warm earthtones. Next, I planned a composition for two passes through the press, dividing the square 8"x8" plate with vertical pieces of tape for an effect of panes. I rolled on patches of the colors I had mixed in a random manner, blending edges to create a soft multi-hued surface, then removed the tape. I scattered pieces of dried grasses and leaves fairly randomly around the surface. The final plate is at left. 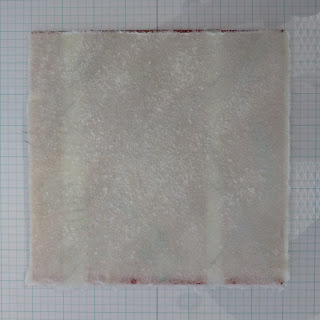 I cut and moistened a piece of Japanese rice paper, sprinkled it with wheat paste powder, laid it face down on the plate, and put the whole thing on the press bed. My grid paper for registration shows around the edges of the plate in the photo at right.

A well-moistened piece of BFK Rives 250 gm paper went on top, and I ran the ensemble through the press. The result was a clean but rather uninteresting print, which I'm not bothering to show here. The chine collé process went perfectly smoothly, though the rice paper is not obvious on the print. Also, as it dries, the print is wrinkling; I'll have to research how to press it flat, if possible. The rice paper must have inadvertently gotten stretched, and is contracting as it dries, causing the support paper to wrinkle. 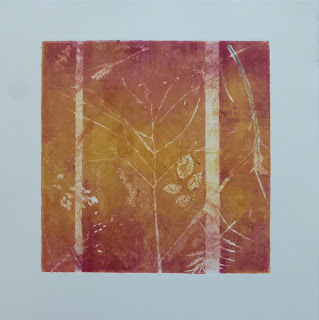 For the second pass, I simply removed the plant matter from the plate, turned it 180 degrees so that the pattern printed differently, and ran the ghost plate on top of the original print, which I laid face up on the press bed to make placement of the plate easier. Some of the remaining ink covered what would have been white paper from the first pass, and other ink transferred to the print and added complexity to the composition. The effect was subtle, but very pleasing. The first pass may have been too densely colored for the full effect of the ghost to come through; I'll have to try more transparent ink, perhaps, or work with ghosts on top of ghosts.

I am pleased with the result, though I think it needs to be fine-tuned. In fact, I was so pleased that I repeated the process for another, slightly different print, left. 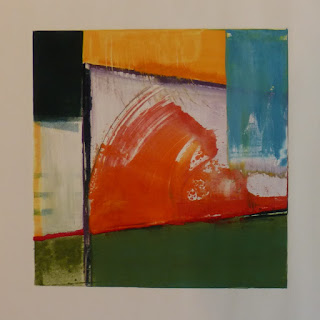 One of the delights of monotype work is the unpredictable nature of the results. Still, I continue to seek some degree of control over both the process and the product. Today I did a single-pass 8"x8" print (at left) that came out as I wanted, except for the center-stage swipe of orange, which did not fade off in streaks as I intended but rather ended in a blob. I may simply not have made the appropriate stroke with the metal putty knife I was using to lay down the orange paint. Part of the problem was handling the paint on the plate, and the as-yet-unanswered question of when a second plate layer bleeds through the first, and when it will stay hidden behind. Is it a question of viscosity? The other, related question was, when is it necessary to wipe out of the first layer and paint into the blank spaces, rather than layer on top?

There are other reasons why I don't like the print: the line between the orange and green areas is too abrupt and needs some transitional marks; the black area comes down too far; the green area is too flat. I thought perhaps a ghost print might be closer to my original idea, but it turned out uneven and unsatisfactory.
Posted by Nancy at 5:38 PM No comments: