back at the easel 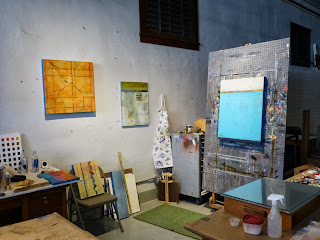 I am just back from a long-planned week of painting that became a kind of retreat for myself and my friend and fellow cold wax painter, Phyllis, at the Studio Group facilities in Helper, Utah. With rooms and studio space of our own, we shared a communal kitchen and lounge with a group of five artist interns studying with David Dornan for the summer. The entire building, once a hotel in the old railroad days of the town, lives and breathes art. There are few distractions other than the beauty of the country and the small river that runs through town. It is hard to imagine a more nurturing environment for getting back to painting. Almost overnight, the rhythm of my days changed from those of convalescence to those of creation.

Each day we woke early, breakfasted, took a walk along the river or through the town, then settled in to work, sharing thoughts as well as adjacent studio spaces. When it seemed time, we broke for lunch, then returned to work until late afternoon, when it usually seemed time to do something else. We watched videos (Andy Goldsworthy's Rivers and tides, Paula Roland's Encaustic monotypes), interacted with the other residents, talked art, and generally relaxed. Dinner, then a DVD film or game of cribbage, although since the living quarters are on the second floor and the studio space on the first, it was easy to run downstairs to contemplate work or get another half hour of painting in before bed.

The multiple fractures of my right wrist last February had prevented me from painting until this past week. Even three months later, the wrist and hand are not back to normal, and every hour of work in Helper consisted of 40 minutes at the easel and 20 minutes elevating and icing the arm. Still, I did this for about six hours a day for six days, and was able to function normally at the easel. I completed one painting, nearly completed a second, and halfway completed a third (all shown above, in the studio space at Helper). I am more than pleased. It feels as though my winter has ended.
Posted by Nancy at 8:17 AM No comments: