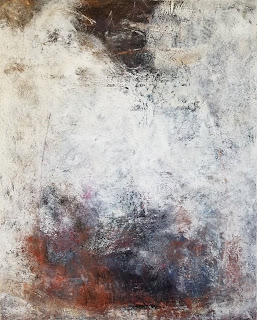 I was deeply engaged in my "olla" series as Winter Solstice and the Christmas holidays approached, but I was still working at the level of probing materials and techniques, leaving the search for any deeper meaning to evolve on its own. The painting at left, 24" x 30", most successfully achieves abstraction while still leaving the figure detectable.

Since I first began to paint (yikes! it's been more than twenty years!), I have been aware of a desire to communicate through my work. At first, just communicating the fact that I was painting a rural landscape was achievement enough. But as my own style evolved, I found that I wanted to portray landscapes that had meaning. Hence my "Colorado Plateau" and subsequent series.

As I moved further into abstraction, my goal remained to communicate something positive, to bring some beauty into the world. My work remained largely landscape-based, but with the addition of this conscious desire to evoke calmness, peace, and even contemplation. Stillness amid the chaos of life. Then preparing for the "Nest" exhibition pulled me away from landscape themes and into a different series, attempting to portray what the concept of "nest" meant to me. It was a more direct attempt to paint feeling than anything I had done before, and it is interesting in retrospect to see that I used a figure (which represented an abstract nest shape to me) on which to base abstract paintings.

My work between the nest series and the move to Tucson roamed around looking for a direction, and to me it is nothing memorable. The fact that I have returned unintentionally to figure-based abstraction, as I attempted in the nest series, may mean that I am back on my path. We'll see. More thoughts to come.
Posted by Nancy at 11:14 AM